Since 1936, Wirz has conceived, visualised, written and realised countless campaigns for a wide range of clients. Today, we are happy to rummage through the chest of the past and look at older and old work. 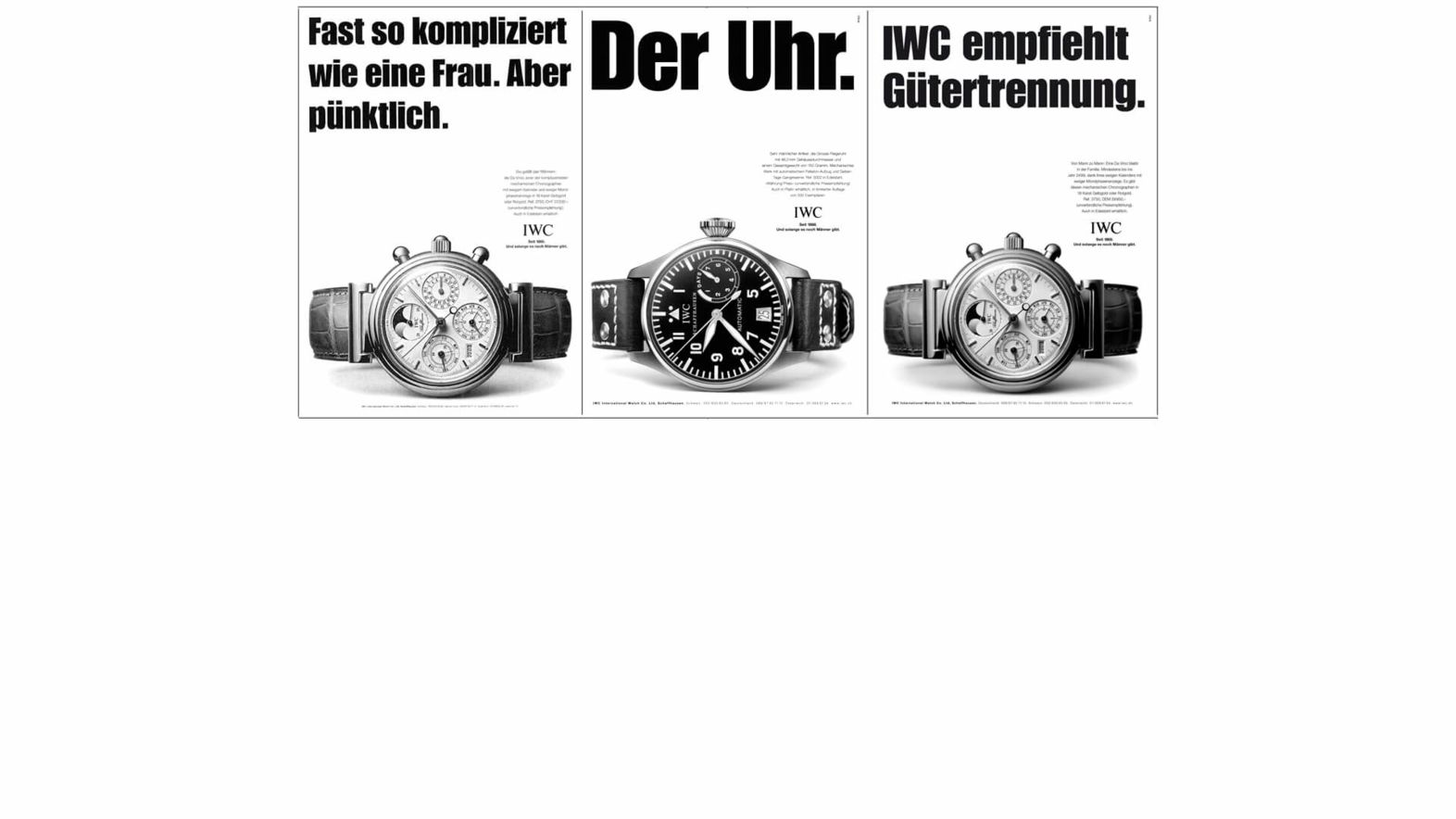 Thomas Kurzmeyer, Creative Director and co-creator of the campaign, analyses THE Wirz campaign for IWC from 1999 and tells us how it went from briefing to implementation and whether he would still choose the same strategy today.

In 1999, IWC attracted attention with simple posters and provocative headlines. Why don't you put this campaign in chronological order for us? What was the strategy behind it and why was it chosen?

As the CD in charge, Hanspeter Schweizer, explained when I asked him, the briefing consisted of a single sentence: "We make watches for men". It came directly from the mouth of Guenther Blümlein, the CEO of IWC at the time. While the agency was digesting this statement and a few croissants, Hanspi suggested that they do an ironic campaign to preserve the man. The CEO thought that was swell and the head of marketing probably reflected that it would not be beneficial to his career to contradict him directly. The agency had actually prepared for a lengthy strategy workshop and booked an external meeting room appropriate to the status of the brand, including lunch reservations at a restaurant with an upscale wine list - those were different times back then - but it could all be cancelled.

Do you remember what reactions the campaign generated back then?

It polarised, of course. Equality had been a big issue for a long time, many men were already somewhat insecure in their understanding of their roles, and that's exactly why the intensification made sense. However, the agency also had to promise to answer all negative letters to IWC itself (which certainly took longer than the conception of the campaign). Surprisingly, by far the most negative reactions came from men. The boss of a large industrial company sent his Portugieser back to IWC, and the then SP Federal Councillor Moritz Leuenberger wrote to Jost Wirz saying that unfortunately he could no longer wear his IWC on official occasions. By far the most positive reaction came from the sales figures. IWC informed the agency after the campaign was over that they had not changed anything in terms of products, distribution or anything else, but only in terms of advertising. And that sales had increased by 23% as a result.

How would you solve the briefing today? Would you go in a similar direction?

I spontaneously doubt that I would want to venture onto the slippery slope of the gender discussion. Society as a whole is much more thin-skinned about this topic than it was back then, and the backlash would be correspondingly stronger.

But one thing you have to give the campaign credit for, regardless of whether you like it or not: it came across completely differently than advertising for luxury products usually does. The briefing could have been realised with heroic portraits of interesting men or particularly masculine celebrities or in 100 other traditional ways. And I would want to approach it in exactly the same way today. If IWC ever gets back to us, I'll be very happy to think about how exactly.

How should provocation be used today to achieve the client's business goals?

There is no one-size-fits-all recipe for this. In general, it should never be about using provocation in any way. It is merely a by-product of what you actually want to achieve: attention, acceptance, enthusiasm and emotional closeness with such a large part of the target audience that it is worth accepting negative reactions from other sides. That takes courage, but it often pays off with dividends. As the IWC campaign proves, for example, which our agency is still being asked about every now and then, even after 20 years.

Three steps to a digital company

How traditionally run organisations can reap the benefits of data-driven governance.

Since 1936, Wirz has conceived, visualized, copywritten and implemented countless campaigns for a wide range of clients. Today, we are happy to rummage through the chest of the past and look at older and old work.